Technology has advanced since Mr. Spock (R.I.P. Leonard Nimoy) first appeared on the science fiction television series, Star Trek. The concept of the cell phone or personal communicator was first depicted on the television series. Now mobile phones are ubiquitous. The world caught up to Star Trek in that regard, but we've yet to achieve another advance from the show, namely, the Vulcan mind-meld. Imagine using the mind-meld for good, to gain feedback from team members. We don't yet have mind-meld technology, but we do have at our disposal a few simple and effective tools we can use to gather meaningful feedback. And, our friends and colleagues are probably grateful of these non-invasive techniques. If they are not, maybe you should try the Vulcan mind-meld. Each of these feedback / debrief tools is free. Please print them, use them, and share them widely. 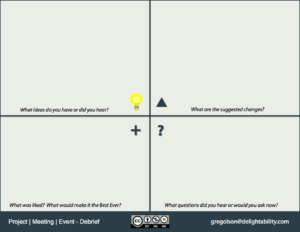 Use this 4-block debrief form to gain new insights and make improvements in most anything.  Suggestion:  Have each team member complete this individually, then take turns sharing.  It is useful to collate the findings to reflect on later and to share with others This is especially relevant if you are going to repeat events, projects or have similar meetings where you should incorporate past feedback.  Click here or the image to download the PDF version.  Price = FREE 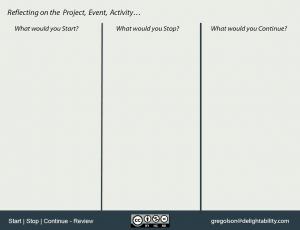 Rules for Giving and Receiving Feedback

Recognize that there are 2 types of feedback – positive and developmental.  We all know what positive feedback is but developmental feedback concerns those improvements that need to be made. Feedback is just that… feedback.  It isn’t a prescription and it needn’t be true or even followed, but it could be both true and worth adopting.

Rule #1: When receiving feedback don't interrupt or offer a defense or any explanation. Simply listen and then ask clarifying questions afterwards to better understand the feedback received. Thank the person for providing you with feedback; simply say, thank you for the feedback.

Rule #2: When giving feedback make it relevant to the person within the context of the project or event being debriefed. This isn't a time to air grievances that you've been accumulating. Save that for Festivus. Click here or the image to download the PDF version.  Price = FREE

Rewards Worth the Investment

I've used these debrief tools to document feedback on my own projects as well as gather feedback from team members after an event, important meeting, or when a major project completes. Letting each team member of a 12 person team share their feedback takes considerable time, but you'll find the rewards are well worth the time invested. Insights and heightened engagement await you.  Also, consider putting "sensors in the ground" to gain feedback at various touchpoints from customers and prospects (and partners), but that's a story for another article.

Ready to discuss your needs?