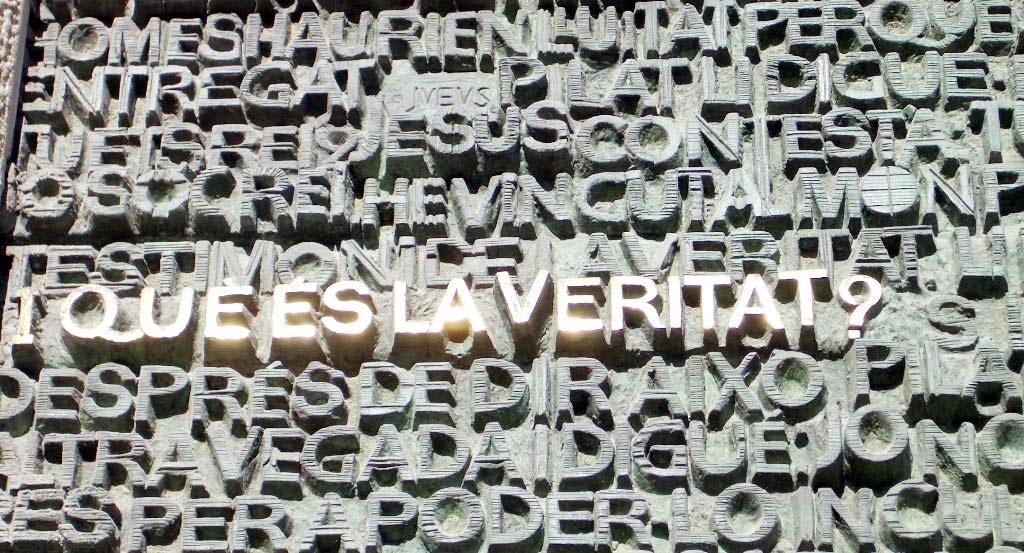 It has been a really busy week for the TRUTH.

Now, no matter what we believe or how we react to these developments, there is a TRUTH that supersedes our opinions and reactions. I view truth much like I do gravity. You can choose not to believe but that doesn’t make it go away.

I want to be crystal clear on what I mean when I say Truth. I’m talking about conformity to facts; accuracy. Certainties. The truth I’m talking about isn’t squishy. A moral relativist would have you believe that truth is relative to the circumstances. I’m not talking about a malleable truth or aberration of fact. I’m taking about that which is incontrovertible. Like Newton’s law of universal gravitation. It applies to everybody whether they choose to believe it or not.

Human Responses to The Truth

When we are exposed to a new truth, our reactions fall into a predictable range of human responses:

But sometimes the facts don’t fit our current views at all – that internal narrative we play in our head. When our views are challenged with a new truth we have a few OTHER options to choose from.

The original logical fallacies were documented more than 2400 years ago by Plato and his thinking colleagues. You’d think we’d have learned by now.

Here are a few of my favorite logical fallacies.

The Ad Hominem Argument: This is where you attack your opponent’s character or personal traits in an attempt to undermine their argument.

Example: It is conceivable that any one of the presidential candidates could say something truthful. It could happen! But, reactions to their statements could easily be, “Well, he’s a communist.” “She’s a pant suits Nixon.” “He’s a xenophobe” So, we can’t trust them.

Another common logical fallacy is the The Appeal to Tradition: This is the fallacy that a standpoint, action or situation is right, proper and correct simply because it has “always” been that way. Imagine not being able to advance human progress in the name of tradition. You’d still be cooking over fire, hunting and gathering your own food, and you certainly would not be able to read this passage, and least of all on a computer or smartphone.

The opposite of this is The Appeal to Novelty or Innovation. This is the notion that this is NEW, and [therefore it must be] better!”

Then there is the The Big Lie Technique. This is the contemporary fallacy of repeating a lie, slogan, or talking-point until it becomes part of daily discourse and is no longer questioned. An example is  the non-existent “Weapons of Mass Destruction” “WMD’s” in Iraq, used in 2003 as a false justification for invading that country. [See also Mind Hijacked: A History Lesson in Propaganda.]

What About Reaction to Lies?

Whether it is fact or fiction if it reinforces our beliefs then we strengthen our views, digging our heels in further. And, if it doesn’t strengthen our views then we dismiss it. Researchers refer to this phenomena as the “backfire effect.”  It is even more pronounced when the new information challenges an especially emotional or long held belief. For a depth reading with examples on WMDs, Stem Cell Research, and Climate Change see this document.

The takeaway from this is: it’s really hard to change people’s minds.  Some people will want to build a wall, no matter the facts presented to them.

Friedrich Nietzsche said it well, “Sometimes people don’t want to hear the truth because they don’t want their illusions destroyed.” I want to put this another way, “We only see the truth we are looking for.”

I opened this talk with stories about Freddie Grey, the new book BraveHearts, and debunked reports of chairs being thrown at the democratic convention. I used these 3 examples because:

Our republic in caught in the grips of a protracted presidential election. As a nation, we face important issues. It is hard to solve problems when you don’t even agree on the truth.

Ann Richards the former democratic governor of Texas once said, “We’re not going to have the America that we want until we elect leaders who are going to tell the truth not most days, but every day.”

But, the Truth is too important to leave to politicians, alone.

In a civilized society each of us has a duty to respect and uphold the truth. We also have a duty to hold others accountable to do the same. Imagine the possibilities if we made the truth matter. In this election year, the Republican and Democratic parties are splintered. They are worried about healing and uniting their respective parties.

Their focus however,  Ought To Be on healing a nation, not a political party.  And, that gentlemen is the Truth.  Now,  I’m counting on You to uphold it.